The Gene E. and Adele R. Malott Prize for Recording Community Activism recognizes biannually the best literary depiction of an individual or small group of individuals whose efforts resulted in a significant improvement of their local community. Although the work of community improvement must be significant, the basis of the prize will be the skill and power of the literary or film depiction. Eligible media include books, magazine articles, series of newspaper articles, or films, published or released within the past two years of a prize cycle, that is within an odd-numbered year and its immediately following even-numbered year, e.g., 2015-2016. The prize for the writer, or in case of a film divided between the director and screenwriter, is $1,000. View Past Prize Winners.

About Gene E. and Adele R. Malott and their Prize 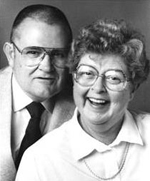 Gene E. Malott (1933-1999) and Adele R. Malott (1935-2005) created careers in print journalism, as reporters, editors, and publishers of newspapers and magazines, winning many awards for their endeavors. Later in their lives, they turned to travel writing, making a niche in writing directed toward senior travelers. Gene Malott received the prestigious La Pluma de Plata award, or silver pen, from the Mexican government for his writing on Mexico, and the members of the Society of American Travel Writers elected Adele Malott as their president. Throughout most of their careers, the Malotts lived in relatively small communities, San Mateo, California; Little Falls, Minnesota; Reno, Nevada, and were keen enthusiasts of their local issues and politics, as both reporters and participants. Even in their later years when travel writing required frequent international journeys, they remained, as they were throughout their lives, devoted to and enthusiastic about the communities in which they lived. Adele R. Malott established the Malott Prize through a bequest to The Langum Foundation, whose founder and Director, David J. Langum, Sr., was a close friend of the Malotts since the mid-1960s.

Adele Malott was convinced, in her words, that “at democracy’s heart are people who find themselves agitating for change to make things better, repair something that has broken down or create new solutions for old problems. Such changes do not come easily. Nor without pain and leadership.” Some examples include Erin Brockovich, a file clerk in an attorney’s office who shook Pacific Gas & Electric Company by the scruff of its neck and alerted Hinkley, California to the carcinogenic pollutants the company was leaching into the city’s water supply. Her successful efforts inspired the popular 2000 film, Erin Brockovich. In this case, while Erin Brockovich herself would not be eligible for the Malott Prize, the movie would be. Another example would be the work of John Champion, a machinist in Reno, Nevada, who found filth and pollution in the local Truckee River, and trash and transients along its banks. His agitation and personal example of cleanup drew media attention to these conditions and sparked renewal projects significant enough that the city named a park along the river in his honor. While Champion’s efforts themselves would not be eligible for the Malott Prize, a series of articles in the local media about his efforts would be, and ongoing river projects would be eligible for the supplemental award for the underlying project. The object of community activism could range very broadly, from corrupt officials to local crime, anything that is substantial and essentially located within a community.

Adele Malott was most interested in grassroots activists. She was fascinated by the motivation of quite ordinary people who “found themselves in circumstances that pulled them out of the crowd and caused them to speak up,” even as neighbors judged them busybodies and politicians judged them troublemakers. She wrote that she wished the prize-winning accounts to show us what made the activists move, “what pushed him/her to get off the couch and spend hours at countless meetings trying to be heard, trying to persuade people to help pick up the load and move toward a solution. We should be seeing things through this activist’s eyes.”

Deadlines and Submissions
The deadline for submissions, made by either author, publisher, or filmmaker is December 1st of the even numbered year that completes the cycle, i.e., December 1, 2016 for the two year cycle of 2015-2016.  All materials published or produced in Decembers of even-numbered years are eligible for the preceding two-year cycle and must be submitted by December 1st of the even-numbered year, although they may be submitted in advanced form.  Send all submissions or questions to us as indicated on our contact page.